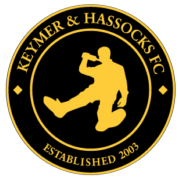 In the last post you saw that the start of season two, our first season in Mid Sussex Football League Division 9, has been a good one. We were leading the league going into the second half of the season and it was ours to lose But now we’ll find out if we did indeed throw it all away over the last set of matches or if we held our nerve and gained a second successive promotion…

Again there are the friendlies which I have explained before (In post part …) and will be a constant feature of the closing end of the season whilst the leagues are small and the fixture schedule has large gaps.

And more importantly, we have had another unbeaten league season which has unsurprisingly guaranteed us the league title and another promotion. So rather satisfyingly our straight to the point tactics seem to be doing the job and despite the odd boring draw, we haven’t often stalemated and failed to break a team down.

A few matches in focus

vs. Crawley Cobras II: Dan Perry scored an excellent first half hat-trick and threw himself into the mix to replace yet another poached striker in the form of Jack Cook. Second half scoring finished of the rout with another from Dan Perry and a coolly tucked away penalty from David Rainford. Strangely we had slightly less possession and even chances in  this match but obviously created better quality chances and were more clinical with 6 goals from 8 shots on target.

vs. Lindfield IV: We struggled massively to keep possession in this match and for once were arguably lucky to win. In fact we only had 41% of the possession and we were bailed out by Jordon Roberts scoring a long range goal in the 2nd of 3 minutes injury time. One possible explanation to the poor performance was that we had just guaranteed promotion in the previous match so perhaps the players felt like there wasn’t anything to play for and got lazy. I’d like to make sure this doesn’t become a recurring attitude.

vs. Heath Rangers (Parsons Challenge Cup Semi-Final): Early goal from a cross gave us a good start and settled the nerves. An incredible 4 goals from Jordan Nuttell, who incidentally is a natural in both the Striker and CD positions, conclusively sealed the match and he even scored hi last goal whilst injured, and injury that turned out to sideline him for 4-5 weeks. Back to deserved wins again with an even possession game but we created double the amount of chances that they did.