Now it has been a while since any posts and firstly I apologise for that, I’ve been incredibly busy unfortunately

But anyway, progress has been made in the meantime and Mid Sussex Football Division Two has been and gone, and here’s how…

So the strikers and wingers have taken most of the plaudits yet again, which despite what the defenders and central midfielders probably say, is a good thing. Because to me it says that we are spending much more of our time attacking rather than defending.

And ultimately the team performed excellently once again. It is noted that we missed our first cup final and as a result, lost out on two of the four cups. However, with the minor nature of the cups and the very secure financial position the club is in, I still judge it as a successful season. Added to this is the fact that we were actually undefeated in the league has meant that the board and fans are very happy once again.

Now I can’t actually go into the usual detail of the season’s cup finals as they were played a while ago, however I will go through what I remember and normal service will be resumed for next season. 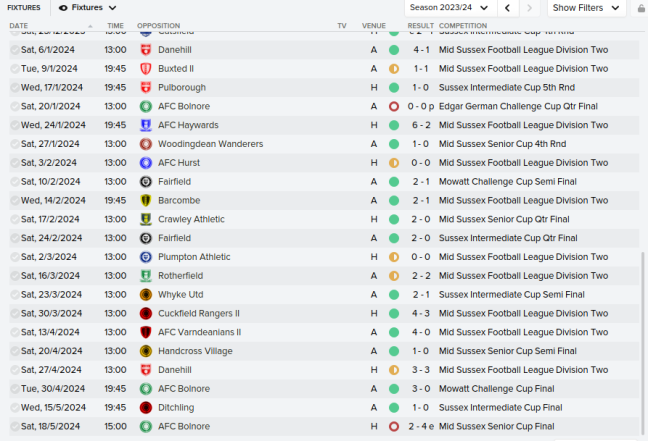 The cup finals against AFC Bolnore (Who now have Tom Cleverly and Lee Lucas, both former Premiership players, which I will just leave here and say no more about…other than what on earth is going on there?!) were two ends of the spectrum with one being surprisingly easy and the other being tight and tetchy and ultimately ending in defeat. Our other cup final was also as tight as the 1-0 scoreline suggests. The goal came about half way through the first half and although some chances were created it never looked like we were going to lose our lead or really extend it.

So another successful season has seen my contract extended with a massive pay rise of £5 a week and the hot seat along with next seasons expectations for another year.

Finally, I know that FM2017 has now been out for some time and there will be some new FM2017 based content coming soon (once I have a new computer sorted out) so hopefully you will come back for that and enjoy it. Also, I will be continuing this series, less frequently, if there is any interest in it. I think it will be interesting to see how far realistically this team can get before encountering serious barriers to progress up the leagues